The Life and Times of Charles “Butch” Hill

“Retire early and get out and travel and trust the Lord!” – Charles Hill

“I grew up on the Bryan Road in Sumiton, finished high school at Dora, went to Jacksonville State and played football. The day after I graduated, I joined the Marines. When I got out of the Marines, I went to work for State Farm and I’ve been here 51 years.”

He sighs. “I guess I’ve had kind of a boring life.”

But the details of his life and times are far from boring.

Sitting at a desk in his Jasper office, Charles reminisces about his younger days. Back then, he was known as “Butch.”

“Everybody across the river knows me as Butch,” he begins. “The night I graduated high school and walked across the stage, they called out ‘Charles Gary Hill.’”

He pauses for a moment. “Some people didn’t know who that was,” he says, smiling.

His roots are in Creel Town, a community in the Empire area named after the family of Millie Creel Hill, Butch’s grandmother. Creel Town, Charles says, was a “tough community” where life was far from boring. He relates an incident that occurred during a mine strike. When a coal company brought trucks in to load coal, one of the miners “mounted a machine gun on the top of the hill and shot a line of trucks up.”

Mine strikes and machine guns aside, this was also a community of close friends and family. “It was rural, and everybody knew everybody,” he says.

Even when Charles started school, he didn’t get away from family. His dad, James, was a high school chemistry teacher and football coach—and Charles’ hero. “He played college ball, fought in the Pacific,” Charles says. “The whole time I grew up, he never laid a hand on me.”

That’s not to suggest that discipline was frowned upon in the Hill home. “Now, my mother didn’t spare the rod at all!” Charles says, grinning. “I was in her room in the third grade in Dora. She liked to have beat me to death. She was afraid if I did anything and she didn’t paddle me, the other kids would think they could get away with it.”

Charles survived and eventually moved on to Dora High School, where he played football. After high school, he enrolled at Jacksonville State and played football for Coach Don Salls. “Well, I wanted to play football, but I wasn’t big enough or talented enough to go in the SEC, so I walked on at Jacksonville [and] played inside linebacker,” he says.

He graduated in 1966, at the height of the Vietnam War, with a degree in biology. Many attempted to avoid military service, but not Butch. “I joined the Marines the day after I graduated college,” he says. “I was an officer and did my training at Quantico.”

After training, Charles deployed to Vietnam, where he served as a part of a tank crew. “Most people don’t realize you can use tanks in Vietnam,” he says, “but where I operated, you could in northern Vietnam from Chu Lai up to Fu Bai.”

While serving, Charles was wounded three times, the last time severely. His military service ended with a tour of hospitals. “I spent eight and a half months in the hospital,” he recalls. “I was in hospitals all over the world. I started out in Vietnam, went to a hospital ship, then spent some time in Japan in a hospital. I came to Portsmouth, Virginia, and stayed in the hospital there. Finally I ended up in Memphis, Tennessee, in the naval hospital.”

Charles was discharged from the military on December 31, 1968.  On January 1, 1969, he took a position as an adjuster with State Farm Insurance. “Then an agency opened up,” he says. He points to the desk in front of him. “I’ve been sitting behind this same desk all those years.”

Butch’s voice is weak but still full of vitality. He has health issues, he explains, that have put limits on him. Instead he gives advice to the next generation. “Retire early and get out and travel,” Charles says, before quickly adding, “And trust the Lord!”

When asked about his own life choices, he responds in six words: “I would not change a thing.”

That doesn’t sound like a boring life at all. 78 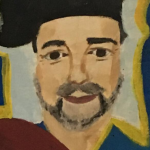